Rage and Mourning at the Capitol: Protest on a Burning Planet and the 9.20.19 Austin #ClimateStrike 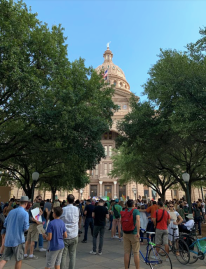 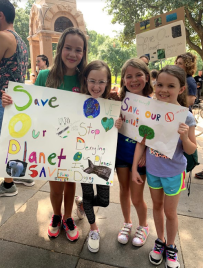 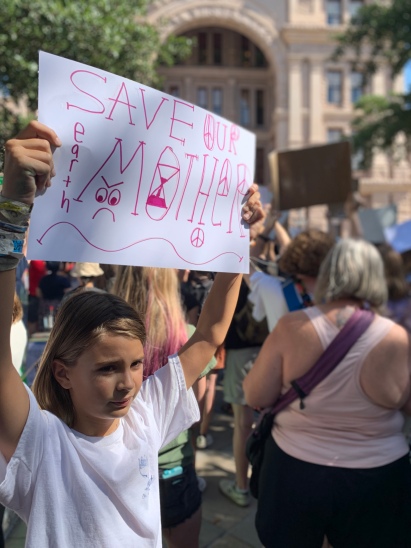 The notorious Swede, Greta Thunberg, has arrived in America and it’s causing quite a stir. Her infamy is well-earned and inspiring in a way that makes you interrogate what you were doing when you were sixteen — was it testifying before Congress? Did your opening statement begin with a plea:  “I don’t want you to listen to me, I want you to listen to the scientists?” Did you submit, in the place of your personally-written testimony, the 2018 IPCC report, in its totality?

[10:10am, 9.20.19] The Austin #ClimateStrikes are scheduled for this morning. I am walking towards the Capitol grounds through heavy construction like a buffer zone hugging the North face of a dome beginning to apparate above the trees. This was an utterly impromptu expedition. I have not run this inchoate article by any editors.

Friday the 20th of September 2019 there were some globally spectacular school walkouts organized almost entirely by high schoolers to agitate en masse against human-catalyzed mass extinction. I went to the Texas Capitol in Austin to annoy several eclectically inspiring young activists by jabbing a cell-phone mic in their faces and bumbling around sweatily calling myself a journalist from the university.

[10:20am] The grounds mill with cardboarded mass. There are whole friend groups and multi-familial block associations and elementary school classes and burbling baby strollers and several overstimulated dogs here. I can’t make out most of the megaphoned words, just their slant, and general volume.

The 2018 IPCC report found that even more catastrophic climate crises will be felt even sooner and at even fewer degrees of warming (1.5, as opposed to 2 degrees C) than previously estimated at the 2016 Paris Climate Accords. The same superscientific body projects that a “business-as-usual” approach to climate action will have us exceeding four to five degrees of warming by 2100 — several degrees of magnitude deeper into the apocalypse.

AUDREY, 9 y/o: Well so in the Amazon Rainforest everything is just burning down and all the animals are going to go extinct if we don’t try to help. And they’re just trying to clear the area so that they can make more buildings and things, but they’re killing all the animals.

GRACE, 9 y/o: The Amazon is known as the Earth’s lungs because it’s so big and there are so many trees in it that it’s providing much of the Earth’s oxygen because it takes carbon dioxide and it gives out oxygen — so that means the fewer trees there are, the less oxygen there is.

EDDY, 10 y/o: I feel like we all came out here today because there’s an obvious problem. At this rate by 2050, there will be more pounds of trash than fish in the sea, and that’s just incredible to think about. So then when does our Earth not become Earth, but just a lump of trash?

[10:31am] An incomplete sampling of decomposing signs — cardboard, plastic, balsa wood: “Denial is Not a Policy” “Planet over profit,” “The Lorax Speaks for the Trees, and the Trees Say F*ck You” “Don’t Be a Fossil Fool” “Stop Denying Our Planet is Dying” “No Plan(et) B.”

TRISH, notable adult: Well my name is Trish Meryl. I just started facilitating a class on climate change at (the University United Methodist Church), and instead of the usual eight or ten people coming, thirty people signed up… there’s a lot of enthusiasm, a lot of interest, and a lot of concern about people of faith being involved in a very positive and helpful way — because people of faith can be very much a problem in terms of denial, and that sort of thing.

[11:14 am] The crowd is large and abnormally young, and building. We’re being funneled up the checkerboarded stone walkway that rises gently uphill from Congress St. to the building’s towering doors, ushered ever-Northward by megaphonists. The most passionate have taken the stairs. The best lack all conviction while the worst are full of passionate intensity, or something. Yeats and his Irish pessimism are usually right about the human spirit but today seems different.

ME: I notice your sign has a Bible verse.

CASEY, 20 y/o, wearing Hijab and glasses with no frames and bearing the dry-erase board from earlier: Yes.

CASEY: Yes. Most climate change deniers identify as politically or religiously evangelical. The way they see it is “Oh, God’s coming back anyway so there’s not anything we can do about it,” but God, in Christianity and most major religions, made us stewards of the Earth, and we have to take care of it. So.

ME: Certainly — and are you religious yourself or is this more about communicating this to others?

CASEY: I’m more so communicating it to them. I am religious but not this religious (laughing)… I would’ve come out with something different if I had a choice (italics added).

[11:45am] Someone has held a megaphone in front of a toddler and it’s leading a call-and-response, all AHHHHs.

How many folks chose to assemble but can’t yet choose to vote? What else to do with all the energy, the festering anger? Where to shout the questions? How many moving millions: agitated, outside, jostling even now and all under one planetary banner and all of it somehow connected to a Swedish child and there’s something smelling distinctly integral about all of this interwoven humanity.

Mann and Wainwright have taken up the question of what governance on a future planet undergoing massive climate fallout might look like. They use two axes: the future regime’s respect for capital and its respect for sovereign national borders. The new global government will either be positive or negative towards each, thus creating four potential futures. The only remotely hopeful one is the fourth — a negative relationship with both capital and sovereignty. They call it “Climate X”: a global alliance for humanity, not enshrined interests, washing away the incremental detritus of our current system. Or, potentially, leading to one particularly successful global totalitarian who’s not interested in our understanding of capital.

I wonder how they’ll repurpose all the pink granite, towering over us for now. “This is Late-Stage Capitalism” standing next to “How Profitable Is Our Extinction?” Quite, I would imagine — ask your local business major.

ME [with the elementary schoolers again]: So you guys are so passionate, you’re so young, you’re so well-informed — I guess I wanted to know why you thought people older than you, who maybe should know better…why aren’t they as fired up? What do you think is going on?

EDDY: Well, I think that can be because sometimes, as you get older, you get more and more information, and that information makes your whole brain more complicated. But when you’re just ten… I know ehhhh [wobbling hand for diminutive effect].

ME: Well you guys seem pretty smart to me…

EDDY: But it’s easier for us to think more simply. And sometimes I feel like some adults, it’s so easy for them to way overthink almost everything. You know?

TRISH, UUMC: When you really know what’s happening, it’s hard to be hopeful. But I think we have to hang onto hope and we have to hang onto the possibility that we can really mitigate some of the damage. As Christians, we’re very concerned about people who are going to be impacted the most, who already are — the poor, people of color, people on islands or in coastal regions. So the hope is in our capacity to do what we can to mitigate that suffering. It may not be in saving the planet, but it could be in doing what we’re called to do.

ME: There’s something to be done.

“This Styrofoam was Sent to Me Against My Will.”

“You need to panic.”

[12:26 pm] I’ve sweated through multiple layers by now and it wasn’t just the nerves. The chants haven’t died nor the speakers subsided but something in me has lessened. Still to come today: a litany of fired-up orators, perhaps five degrees more heat, and the gradual depressive drawing-down that bookends every joyful coming-together.

There is another walkout scheduled for next Friday, the 27th.

[12:36pm] I’ve stopped at a crosswalk. Once you’ve sweated all the way through, pit-stains vanish. Red hand, four corners, you know the drill.

But wait — a collision of colorful signage, there on the other side of the street. Distinct groups, it seems, flushed and laughing and trading tales of sightings and strivings and guttural participation, brought together by bureaucratically algorithmic lights and unknowably interior motivations.

Perched before the asphalt and seeming for all the world (ogling observers included) like today was worth it, seeming undented by futility or the GOP or impending article deadlines.

“Climate Action Now” is chatting with “You Have an Impact.” Sounding essential, hopeful, distinctly human.

Waiting for me on the way out.

“So we can no longer save the world by playing by the rules because the rules have to be changed. To do your best is no longer good enough. We must all do the seemingly impossible.”

Cade Stone is a fourth year Government and Plan II student originally from Austin, Texas. After abandoning an early International Relations major, he has returned circuitously to an overriding fascination with the global stage and America’s role within it. He is particularly interested in environmental policy, trans-Atlantic affairs, and institutional advocacy. When in town, Cade can likely be found at a coffee shop, local park, or one of Austin’s innumerable breakfast taco institutions. View all posts by Cade Stone

highlights of the meeting include Ramiro’s intro paragraph and frozen bananas 🤩 loved seeing all of you tonight!!
beautiful day to hang out at zilker! 🤩🤩 stay tuned for more socials this semester!!
GREAT first meeting tonight!! can’t wait for the rest of the semester 🤩🤩🤩
we loved seeing everyone today!! 🤩 remember to get your apps in and contact us with any questions!