In the first article of this series, I argued that with its mix of executive and legislative functions and its limited funding, UT Student Government operates like a lobbying firm for student interests. SG facilitates deals with the administration, outside organizations, and private vendors to serve student interests. This second piece takes a look at SG’s internal budget and the costs associated with their “investments” in student interests.

*Disclaimer* The Texas Orator received 200 dollars in funding from SG.

That is the yearly allotment for Student Government in the Student Services Budget Committee budget as it has been for at least three years. Put differently, that is roughly 11 in-state tuitions, one complete full-ride (and some change), or 32,701 Double-Double burgers at the In-N-Out on Guad. SG is charged with using that money to further student interests and it has some discretion over how to allocate those funds. However, if SG is the investment firm we hire to allocate that money where it is most beneficial, students might be underwhelmed with their rate-of-return.

Visualizing SG as an investment firm requires a few conceptual tweaks. First, that $112,820 needs to be redefined, and, second, the intrinsic value of SG to students — that is, its value to students who serve in it — needs to be momentarily set aside. This will allow us to look solely at what SG does for students.

Earlier, I said that SG is allotted $112,820, but this statement alone is misleading. If we are to take the lofty aims of the Student Government Constitution’s preamble at face value, then it is more accurate to say that SG is entrusted with $112,820.

KVRX, The Daily Texan, and Texas Travesty are all allotted money in the SSBC budget — $68,903, $273,172, and $8,235 respectively. These organizations use this money to offer their specific service to students, but they make no pretense to being primarily about serving student interests generally. Students who consume their services benefit from the subsidy that they receive from the University; students who don’t benefit might care, or they might not.

SG is unique on the SSBC list of organizations that receive significant direct funding from the University because they purport to serve student interests as their primary goal. If given a higher budget, the Daily Texan is supposed to make a better newspaper, and KVRX is supposed to make better radio productions, but SG is supposed to use that money for students directly. Essentially, the service that SG offers is that it is entrusted with money to make better investments in student welfare.

SG unabashedly holds itself to higher ideals in its preamble. If they continue to claim that they “transparently, effectively, and responsibly use student fees to promote student welfare,” then let’s see how they are doing. 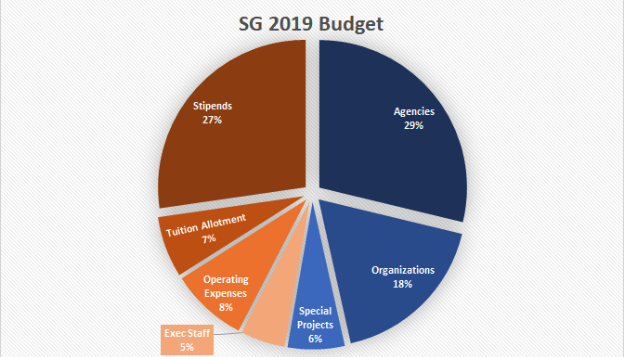 The Student Government budget for 2019 is explicated above. 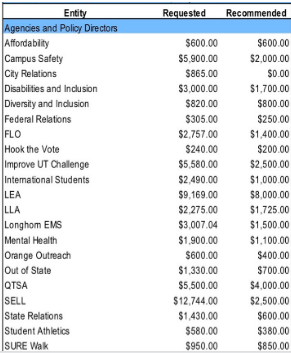 Agencies, of which there are 21 that receive funding in the bill, are SG’s single largest investment expense. These agencies are quasi-executive entities that often function like lobbyists for their niche interests as I mentioned in my last article.

Some of the agencies, like campus safety and affordability, are broad enough to benefit all students, but many, including the three most well-funded (LEA, QTSA, SELL), serve particular student interests — entrepreneurs, LGTBQ+ students, and “social entrepreneurs,” respectively. Because these agencies mix the general welfare of students with the welfare of specific communities, it is ultimately for readers to decide how much of the total $32,455 (listed at the bottom of the chart) they believe represents their welfare (this can, of course, include the prosocial gain of knowing that your fellow students are doing better).

Organizations, funded to the tune of $20,000, comprise the next largest investment. Sec. 4.24(e) of SG’s constitution mandates that it “maintain funds for distribution to student organizations.” A full list of the organizations receiving funding is included in the budget, but here it is more obvious that whether this benefits you depends on your club memberships.

SG’s “special projects” fund is the final category of investments. For the current assembly, no document mentions the words “special project” or “project” and no representative has, as of the time of publication, responded to my request for further information about this designation. Without further information, it is difficult for students to assess how this represents an investment in their welfare.

All told, SG “invests” $59,482 (or 53 percent of the total budget) directly into student interests. As this money is allocated across several agencies and numerous organizations, assessing how much of that represents an investment in you is an individual question. This is no trifling sum and the gains to students are real. However, when we consider how much we pay SG in “transaction fees” to invest that money in student interests, the return on this investment would have to be staggering to merit these costs.

Generally, when a broker makes an investment on your behalf they charge a “transaction fee” for their services. For small accounts, these are often fixed charges, but for larger accounts, brokers will often charge a percentage fee. According to Investopedia, the industry average annual fee is 0.99 percent of the funds under management. So, what are we paying SG in “transaction fees?” The current tally is 47 percent of the total budget or 47 times the average in the stock market.

The comparison may seem incongruous at first glance, but the function of an investment broker and SG in the analogy are the same. In both cases, they are paid a fee because they supposedly know where the money entrusted to them can earn the highest return. For an investment in student welfare, something with a high return would mean it benefits students by more than was spent. If SG spends $1,000 to build a water fountain, students would have to value it at $1,100 to realize a ten percent return.

This is what is meant by SG’s mandate to “effectively… use student fees to promote student welfare.” If SG is to earn its keep, it would have to have a return-on-investment of at least 89.7 percent (for reference, the market average for long-term investments is 10 percent). This would mean that when SG spends $1,000 dollars on any particular student welfare investment, students would have to value it at $1,897 for us to break even.

Proponents of SG have this to defend: paying SG executives $30,780 in stipends (salaries for their sage knowledge of where our money is best spent), Colton & Mehraz $7,558 in tuition allotments, executive branch members $5,500, and SG as a whole $9,500. That is a whopping $53,333 in operating expenses! These expenses can only be justified if those members of SG invest in student welfare so wisely that when they choose a project it is radically more valuable to students than alternatives. Frankly, this beggars belief.

Wes Dodson is a Managing Editor and Law Editor for The Texas Orator pursuing a Plan II and Marketing double-major. A perennial holder of unpopular opinions, Wes approaches national politics from the classical liberal position, which he commonly describes as “small l” libertarianism. After arriving at UT, Wes became increasingly aware of and interested in the role of UT Student Government and has written analyses of the economics of SG and how it is used as a national politics dog whistle. He hopes to co-helm The Texas Orator through the rough waters of student journalism and expand the awareness of student opinions. View all posts by Wes Dodson

Emmett Berger is a sophomore Psychology major from Dallas,TX. In his free time, he enjoys playing chess, reading about biotech, and watching college football. Fun fact— Emmett actually lived in Russia for six years! We’re all glad to have you on our staff, Emmett!
Gloria is a first year Plan II and business major from Allen, TX! She recently joined the Orator as a graphic designer and she says she likes graphic design because it challenges her to be more creative. In her free time Gloria enjoys listening to podcasts and music, reading, and collecting plushies. We’re so glad to have you on our staff, Gloria!
On Saturday morning, Black Lives Matter Plaza was the scene of jubilation as thousands converged to celebrate President Donald Trump being denied a second term. In a scene reminiscent of pre-COVID concert halls, the plaza, which is located a stone’s throw away from the White House, was overflowing with Washingtonians from all walks of life dancing, playing music, popping champagne bottles, or simply observing the festivities. In the background, rancorous honking from passing vehicles could be heard.
Charles is a finance and math double major from Houston who enjoys hiking and writing about economic, domestic, and foreign policy as well as philosophy. Fun fact: Charles is an Eagle Scout! We’re so glad to have you on our staff!