Voting for Democracy – Part 1: A Rank Above

Whether your candidate won, lost, or didn’t even survive Iowa, everyone knows how hectic and disastrous the 2016 election felt. Every debate felt less like a Lincoln-Douglas deliberation over ideals and more like an episode of the Kardashians where personal attacks stand in the place of actual policies. Less than nine percent of Americans wanted either Trump or Hillary as their president during the primaries, but when November came around, these two were the only real choices on the table despite being two of the least favored presidential candidates in American history. Why can’t we vote for the candidates we believe in? Why did American politics become so un-American? Why are we stuck with choices like these? The answer may lie within how you fill out a ballot.

In the United States and in many countries abroad, we use a system called First Past the Post, or FPTP. Under FPTP, every citizen gets one vote and the candidate with the most votes wins. FPTP is simple, easy, and incredibly deceptive as it eliminates a voter’s freedom to choose, a candidate’s ability to compromise, and a nuanced discussion between everyone involved. To understand why FPTP does this, let us work through a few example elections.

Let’s say that elections A, B, C, and so on happen in succession; in any set of variables, it is inevitable under FPTP that such elections will eliminate third parties as a factor of time until only two main parties are legitimate contenders. To prove this, let’s take election A in which seven parties run (Red, Orange, Yellow, Green [a moderate party in this case], Blue, Cyan, and Purple and they receive 5 percent, 15 percent, 21 percent, 13 percent, 19 percent, 17 percent, and 10 percent of the vote respectively).

Under FPTP, Yellow wins despite less than a fourth of the country voting for them, illustrating one of the main shortcomings of FPTP: Minority Rule. Only 21 percent of voters chose the winners in this example, but with more parties, the barrier to win is lowered even further. Seeing their performance in this election, it can be expected that Red and Purple will not run a candidate in successive elections, most likely dumping their votes on the candidates who hold views most like theirs while having a chance at winning, Yellow and Cyan respectively, in election B. Green, being a moderate party, is also likely to drop out of the race and instead becomes a pool of deciding independent votes, much like our own country where 53 percent of voters do not identify with a political party; in this case they split Yellow 6 percent and Cyan 7 percent.

Election B reveals another problem with FPTP: The Spoiler Effect. The Spoiler Effect occurs when a similar party bleeds off enough votes from a large party to cause it to lose despite having many like-minded supporters. In this instance, had Orange not run in the election, Yellow would have won. Likewise, instead of Cyan holding a commanding lead, they only beat Yellow by a few points because Blue voters risked it on their less likely candidate. This happens more often than one would think: Take the 1912 presidential election in which Taft, a Republican with 23 percent, lost to Wilson, a Democrat with 41 percent, in no small part to Roosevelt pulling 27 percent of the vote from Taft on a similar platform. More recently the Spoiler Effect has been called the Nader Effect due to Ralph Nader, a liberal candidate carrying 97k third party votes in Florida, possibly causing Al Gore to lose the key state, and therefore the 2000 presidential election, by 537 votes.

In a further election C, it will be expected that Orange and Blue will stop fielding their own candidates in favor of avoiding spoiling the election. Voila, here emerges the two-party system which we all know and love. A system where scaring voters away from your opponent is more effective than winning them over with favorable beliefs, as such, attack ads and hateful debate rhetoric become the norm. Voters are left distrustful of the other party and of voters who voted for the opposition, defining themselves by partisan alignment instead of their shared citizenship. Voters will mostly, from here on, not vote for their favorite candidate, but instead, for the main party candidate they disagree with the least to avoid getting the candidate they least agree with into office. This is called Tactical Voting or Favorite Betrayal, and this is not how elections should be run. But there is a solution that really is as simple as changing the ballots. It’s called Ranked Voting.

When you walk into the election booth under FPTP, you mark one candidate and walk out. Under a Ranked Voting system, you instead rank the candidates in order of preference, your first choice gets a 1, the second choice gets a 2, and so on until you’ve ranked everyone or determined you don’t have a preference over any remaining candidates.

From here, all the first-choice votes are tallied. If a candidate receives more than 50 percent or is the only candidate remaining, they win, but if they don’t then the candidate in last place is eliminated and every vote for them is sent to the next marked choice. In the ballot above, if J. Doe was eliminated this vote would be given to A. Jones instead. If no candidate has surpassed the threshold then we repeat this process until one does. Take the flowchart below. 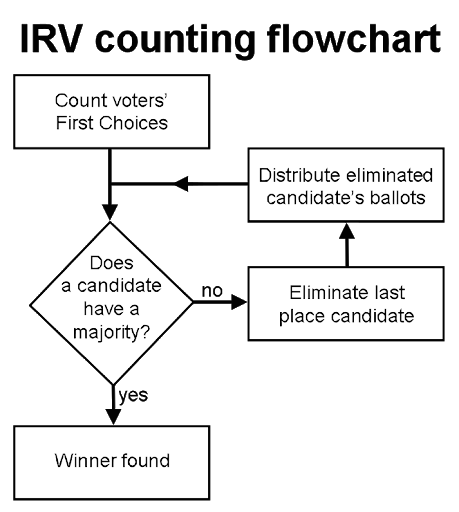 It is often called Instant Runoff Voting because it simulates what would happen in a series of runoff elections without the disadvantages of the expense or lower voter turnout that would come from holding separate runoff elections. This is why, even though Ranked Voting can be more expensive than an FPTP election, it is often the more economical choice as only one election needs to be held. In the cases where it is more expensive, the benefits of its more efficient and representative vote readily outweigh the costs. Other opponents often claim that Ranked Voting is confusing and convoluted for the voter but that has shown to be untrue.

Under a ranked voting system, a voter can vote for their first-choice without fear of the Spoiler Effect. Minority Rule is no longer an issue as the entire range of voters can express their broader preferences meaning we find the candidate most agreeable with the majority as opposed to the favorite candidate of a minority. Since candidates are not just competing for those first-choice votes, but also the seconds and thirds, they will be unable to rely on attack ads and bashing their opponents as that would alienate voters who might consider them second choices. Even the issue of partisan candidates being less than ideal fades away as ranked voting allows you stop holding primaries altogether, no longer will the Iowa caucuses tank candidates who would have performed fine on a national level. Ranked Voting can even make politics less stressful on a whole as the ability to get rid of primaries also means the election season can be shorter. The only people this arguably hurts is the two main parties as they will have to work harder to appeal to their voters as third parties are now a viable option, a side-effect most Americans would actually prefer. Ranked Voting has shown great success in several countries abroad, recently in the state of Maine, and in the student governments of many universities (ours included). As Ranked Voting means elections become more competitive, sitting legislatures have been and will be resistant to this change. But if we as a nation wish to see rational issues-based debates and vote for candidates based on their morals and ability to govern rather than voting for who we hate the least, then it’s a change we must make.

Matthew Cox is a Government and Economics major at the University of Texas. He writes for The Texas Orator on improving social and political systems. In his spare time, Matthew runs the Longhorn Update, a "your week ahead"-style podcast for students on campus, along with a litany of other projects. He is an ardent fan of innovation, obsessed with city design, and wishes to pursue a career that enables him to improve the lives of those around him. View all posts by Matthew Cox

Gloria is a first year Plan II and business major from Allen, TX! She recently joined the Orator as a graphic designer and she says she likes graphic design because it challenges her to be more creative. In her free time Gloria enjoys listening to podcasts and music, reading, and collecting plushies. We’re so glad to have you on our staff, Gloria!
On Saturday morning, Black Lives Matter Plaza was the scene of jubilation as thousands converged to celebrate President Donald Trump being denied a second term. In a scene reminiscent of pre-COVID concert halls, the plaza, which is located a stone’s throw away from the White House, was overflowing with Washingtonians from all walks of life dancing, playing music, popping champagne bottles, or simply observing the festivities. In the background, rancorous honking from passing vehicles could be heard.
Charles is a finance and math double major from Houston who enjoys hiking and writing about economic, domestic, and foreign policy as well as philosophy. Fun fact: Charles is an Eagle Scout! We’re so glad to have you on our staff!
check out our website for coverage of recent election-related events!!!